Member of Parliament for Braintree
I was first elected as the MP for Braintree in 2015.  Since, I have campaigned to improve the lives of those living in our communities by making our streets safer and our schools the best they can be for our children.  I contInue to lobby to improve our experiences at local GP practices and hospitals, whilst also contInuing the fight to make our transport infrastructure fit for purpose with the hope to upgrade the A120. I have enjoyed fighting for my constituents in Parliament, whilst also filling numerous roles within the Conservative Party.

I was appointed as Conservative Party Chairman and Minister without Portfolio on 24th July 2019 in the recent cabinet reshuffle.  Prior to this, I was Parliamentary Under Secretary of State at the Department for Exiting the European Union from April 2019 to July 2019 and held the position of Deputy Chairman from January 2018 to April 2019.

Before being elected to represent the Braintree Constituency, I served on the London Assembly for 8 years.  During this period, I held the posts as leader of the conservative group in the Assembly, the Mayor's Youth Ambassador and Deputy Mayor.

I voted and campaigned to leave the European Union.  I joined the Leave campaign before many of my colleagues and continue to believe that Brexit is a fantastic opportunity for our Country.

I enjoy spending time with my family at home in the constituency and I enjoy supporting the Halstead Templars RFC and Braintree Town FC (Braintree Iron).

I was born in Lewisham, South London.  My mother was from Sierra Leone and worked as an NHS nurse after emigrating to Britain, so I'm well placed to contribute to the 21st century concerns about health and migration.  I am ranked Lieutenant Colonel in the British Army and an based at Central Volunteers HQ Royal Artillery in Woolwich, London. 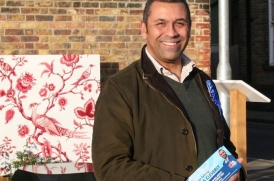